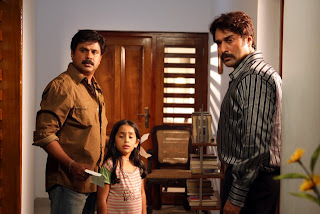 Fazil, one of the most successful directors in Malayalam Cinema, is directing Rahman for the firt time. Rahman had missed two Fazil films earlier due to date clash-Nokkethadoorathu Kannum Nattu and Ente sooryaputrikku.

The film deals with relationships. The relationship between Moss D. Samuel (Dileep), a happy-go-lucky guy and Tessy (Nivedita), a child, who enters his life by chance and the ties that bind Nandana (Aswathy) and her brother Sumesh (Rahman), a junkie. Moss, an orphan, is a con man and Tessy is his accomplice. They bump into the affluent Nandana during one of their con jobs and the trio become friends. Nandana, who is worried about Sumesh, gets Tessy to remind Sumesh of their childhood carefree days. However, things take a dramatic turn from then on.

The film, scripted by the director himself, is being produced by Johny Sagarika. Cinematography Ananthakuttan. Ouseppachan is the music director. Don Max is handling the editing. Still photography is by Hari Tirumala.

Hope Rahman will re enter the hearts of all malayali film lovers after this film.