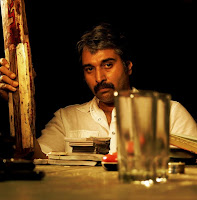 The very first shot of the movie featuring Prithviraj was received with such maddening applause heard only for superstar movies usually. And when he utters the word Mangalasshery Neelakanthan, the crowd goes even more wild. I couldnt hear any of the first few dialogues because of the noise. Later, we realize that Prithviraj is writing a story about a certain incident and that he is now going to revisit the place where the incident happened. Rahman, Sukumari and Manian Pillai Raju are also people affected by that particular incident and all of them meet at that place. Jayasurya plays a non-Malayali who decides to cancel his plans of going to Vallikkavu Ashramam, in order to help out Sukumari. From a narration by Prithviraj, this movie moves on to Jayasurya who shares his experience to a senior officer sitting inside Kerala Cafe. This is a technically slick movie with some great cinematography by veteran S Kumar and art direction by Manu Jagadh. Prithviraj looks dashing, so does Rahman. All the actors perform well, and Sukumari, who is not seen regularly these days plays a strong role. Jayasurya does a neat job in his short role. A very impressive debut by Ranjith's assistant, Shankar Ramakrishnan.